Alex Aldridge, a midfielder from the Kansas City area, signed with the team on July 16. We would like to welcome Alex to the team! She is excited to join us. Alex was one of the strong leaders of her high school team (Winnetonka.)

Alex's signing brings our total active roster to 20. Coach Kim Matzen (our wonderful assistant coach--recently married to David Matzen)can't remember ever having 20 players on the roster. Coach Kim helped start the soccer program as the starting keeper in 1994 and after she graduated--she became one of the assistant coaches and has been with the program since then, so she should know.

The coaching staff can't wait to get this great recruiting class on the field. August 4th can't come soon enough for us!

We are also finishing up our summertime training at X-Edge. It has gone very well--we recently had a freshman set a school record with a squat of 225 (two 45 pound plates on each side!) 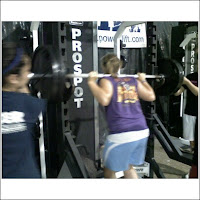 We also just finished up putting on a camp for the Springfield Soccer Club this past week. It was hot but it was a lot of fun. Some the highlights were watching camper Alexis winning the limbo contest and in the campers vs coaches final game--the campers tied the coaches 2-2!
Posted by Coach Jim Homan at 8:56 AM No comments:

4 Weddings and a Pre-Season

Today my family went to Molly McGowan's wedding to Andy Cada in Schuyler. It was a very nice wedding and a fun reception. I saw a number of former CSM players at the wedding and reception. It is great to see teammates supporting each other. It has been a summer of CSM weddings. Our assistant coach Kim Ernesti ('98 CSM grad) was married in May to David Matzen. Mandy Saar (09,) who played for us last year was married a few weeks ago. Molly ('08 grad) walked the aisle today and Jessi Brannen ('08) gets married on the 19th of July. As a matter of fact, both Molly and Jessi got engaged during the 2007 soccer season. It is truly great to see these quality individuals get married. You hope that CSM has been an important part of their lives and will continue to be so.

Pre-season begins in a few weeks on the 4th of August. We are all looking forward to getting started. In the meantime, we are playing in the Sunday 8v8 league (record= 2-1) and will be in Springfield July 21-25 putting on a soccer camp to help the club players there improve their soccer skills.
Posted by Coach Jim Homan at 9:13 PM No comments: