My wife and I watched Nebraska's volleyball team lose to a very good Penn State team last night. Penn State hadn't dropped a set all year but Nebraska took the 3rd and 4th set from them and had them down 10-8 in the fifth. Then Penn State rattled off a bunch of points in a row and just like that, Nebraska was toast. As Nebraska was winning its two sets, my wife was jumping around the room, living and dying with every point. At one point she looked over at me and said, "How can you just sit there?"

How can I just sit there? I was practicing.

Let me explain...I tell my soccer teams that even off the field they should practice handling pressure situations. They should put themselves in a pressure-packed situation on purpose and rehearse being able to deal with the high anxiety of a big event. That is what I was attempting to do. Believe me, my heart was beating fast as Nebraska was coming back, but I was attempting to remain calm and trying to think what I would say to the Nebrasksa team at the next time out. Ya...I know that is kinda out there..but that is what I did.
Posted by Coach Jim Homan at 9:19 AM No comments:

My Packers Cannot Stop Anyone 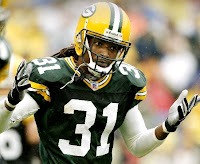 In addition to being the coach of the awesomely cool CSM Flames, I also am a fan of the Green Bay Packers professional football team. I had high hopes this year for the Pack because, last year--they were within one game of the Super Bowl. I had hoped this year they would take the next step. Not happening.

With 3 games left in the season, the Packers are 5-8 and probably won't make the playoffs. They still have a slight chance (there is alway hope) but it is not a great chance. What went wrong? Defense, defense, defense. The defensive side of the team cannot stop anybody--a team that is 9-3 or a team that is 5-7. Doesn't matter, the Pack doesn't discriminate against who it can't stop. Injuries have effected their play but that is not the whole story. The coaches say it is a matter of execution. The players are not executing the game plan. What happens? In pressure situations, sometimes players brains don't work as well as they do in practice situations. Two things will help, repetitions during a pressure situation as well as training your mind to deal with pressure. I tell our team that you can do 2 things with pressure, you can feel it or you can apply it. (I got that from Jon Gruden, Tampa Bay Bucs football coach.) I take it a step further and tell the team if you are "feeling" pressure, then you should "apply" pressure to the other team and then you won't feel it so much.

The lack of success the Packers are experiencing just goes to show you how important defense is to a team. When people say that defense wins championships--they know what they are talking about it. I just wish the Green Bay Packers could play defense this year. When I coach, I really try to get the players to make a total commitment to defense. That is one road to success.
Posted by Coach Jim Homan at 11:44 AM No comments: