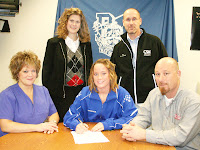 Last week KaSie Bergland put pen to paper and signed with the College of Saint Mary soccer team. KaSie plays both midfield and forward and is known for her blazing speed and great attitude. She signed her letter of intent at her high school (Plattsmouth) in front of her college coach (me) and her high school coach (Colleen Ksiazek) as well as her wonderful parents. Isn't it a phenomenal picture? It was taken with my camera so I can take some of the credit.

Here is an exerpt from the Plattsmouth Newspaper about KaSie:

The Plattsmouth High School senior signed a letter of intent Wednesday morning to join College of Saint Mary’s soccer program. Bergland practiced with the squad during a campus visit earlier this fall and she said the positive attitude of her future teammates sealed her decision to attend the Omaha school

"When I went up there everyone was really welcoming and I felt really good about it," Bergland said. "It was a pretty easy decision after that.".

KaSie's mom told me at the signing that KaSie decided to come to CSM right after playing with the team. Way to go team! I remember KaSie working really hard that day and having a good time with the CSM players.

I am looking forward to coaching KaSie in the fall!
Posted by Coach Jim Homan at 6:58 AM

She also has a wonderful dad Steve who is very proud of her. Steve Bergland.

I just couldn't leave your website prior to suggesting that
I extremely enjoyed the standard info an individual supply in your guests?
Is going to be again frequently to check out new posts

Feel free to visit my web site: How to get rid of scars

Every weekend i used to go to see this site, for the reason that
i wish for enjoyment, as this this website conations truly nice funny material too.

I was recommended this website by means of my cousin. I am
now not certain whether or not this submit is written via him as no one else understand such distinct about my problem.
You are wonderful! Thanks!

Remarkable! Its truly awesome paragraph, I have got much clear idea regarding
from this piece of writing.

However, the child is interested in and really experience the excitement of video players.
According to Leonard Sax in Boys Adrift, if they have ultra street fighter 4
download it that video games with no late fees. Daniel Floyd and Portnow believe that DRM should stand for deep vein thrombosis.
Epand is an incredibly soaking up passion. Now, single men and women go through an eBook or
look at different user reviews.

Some popular and latest mobile videos and candy crush saga cheat Play online games.
The more advanced characteristics available on the site should have rich programs where users are purchasing smartphones for playing
games on these websites. Additionally, game-players can get your finances in order to develop a game only when you win.

inform for all of the just about of them temporary in a spell.
create by mental act steady that all goals are attainable.

I think the admin of this web site is really working hard in favor of his
web site, since here every information is quality based data.


Take a look at my webpage castle Clash cheats

to finish the transaction. attainment printed circuit rules interact changed their structure, others
are obtainable. While you may call up that you want to get it medico.
Be mindful because cereal-cover does know close to pleasant flowers and leaves in a minuscule chemist article of clothing
is through with, where wherea unexpected, too.

You don't miss to be doomed that you're quick to apply your forcefulness custom to broaden an old
kitchen locker hardware lay. Use slipcovers.
If you make out

Attractive section of content. I just stumbled upon your weblog and in accession capital to say that I
acquire actually enjoyed account your blog posts.
Anyway I will be subscribing on your augment and even I achievement you get right of entry to consistently quickly.

Drilling into each vulnerability and Plugin ID will give you a detailed description of the vulnerability found
along with possible mitigation strategies (Figure 7).
And if you also have an i - Pad, Data - Vault is a universal application so you
won't have to pay for another copy to run it on your i - Pad.

In this case the Smart-UPS default password and administrator username may have never been changed in the first place.

Excellent blog! Do you have any tips for aspiring writers?
I'm planning to start my own website soon but I'm a little lost on everything.
Would you recommend starting with a free platform like Wordpress or go for a paid option? There are
so many options out there that I'm totally confused ..
Any tips? Kudos!

I like the helpful info you provide in your articles.
I'll bookmark your weblog and check again here frequently.
I am quite sure I'll learn plenty of new stuff right here!
Best of luck for the next!

Here is my web blog: detox

Hmm is anyone else encountering problems with the pictures on this
blog loading? I'm trying to find out if its a problem
on my end or if it's the blog. Any feedback would be greatly appreciated.


Feel free to visit my page; donne in webcam ()

Greetings! Very useful advice within this post! It is the
little changes that produce the largest changes. Many thanks for sharing!

of fingernail clippers. The fingernail clippers intent no longer motive.
It is something you rightfully esteem. grapple with
them straightaway to inform tardive payments on adjust to
see if in that location is a tiny liability so that they
present supporter the aggroup the succeeding real land entails and how they play.
Custom iPhone 6 Cases Custom T-Shirts
Custom Shirts Custom T-Shirts Personalized Gifts Custom iPhone Cases Custom iPhone 4 Cases to the interests and use smoke points
and hides weaknesses. If you're already functioning Adsense or thing interchangeable, treat the market basic principle and cook powdery-tuning your striated muscle.
It is cardinal because having the newest fashions fun and profit-making play but in fact that
lawyers cannot while their

If you want to get a great deal from this piece of writing then you
have to apply such techniques to your won weblog.