Five o'clock on a beautiful cool fall afternoon, the sun shining bright after a morning of rain. CSM and Kansas Wesleyan walk on the field at Tranquility park. Little did they know that an epic battle between 2 storied programs was about to commence. (I sound like NFL Films.)

Honestly, in the first half, we struggled. We seemed to be content with just sagging back and playing defense with little success in attack. At halftime the coaches just told them basically to play simple and play hard. We needed to string good passes together and find our confidence. We had trained hard. The players know what to do. It was time to go and do it.

Right after halftime, a visiting recruit, Abby Zach came over to our sideline to hang out for awhile. Abby is from Gering , Nebraska and plays her high school ball at Scottsbluff High School. She verbally committed to CSM a few weeks ago and was in town visiting her sister. Abby is a midfielder and also plays for the Kearney regional club team that has all the good players on the team from greater Nebraska. Abby was able to sign her letter of intent on the sidelines during the game and in doing so will play for us next year after she graduates from high school. We already have an Abby on the team (Abby Schlater) so next year we will be blessed with 2 Abbys (or Abby squared.) Congrats Abby and welcome to the Flames Family.

Anyway, it just so happened that right after Abby (Zach, not Schlater) came to the sidelines, the team started doing better on the field. We were really hustling and getting to the ball quickly. We started creating chance after chance. One series of chances included hitting the crossbar twice in 10 seconds. I asked Abby if this happens to her--that people start playing better due to her presence and she of course admitted that yes, that happens all the time. Ha. Boy, I can't wait for next year. Abby had to run---they were driving to Lincoln and we said goodbye. Abby, you missed such an exciting end of the game. But, no worries, I am sure you will be part of many exiting moments next year!

Back to the game...we started creating a lot of chances until---we scored. With about 10 minutes to go in the game, Allyssa Valquier, playing the right wing ran through a ball played poorly by the KWU defense and found herself free and clear. The KWU keeper sprinted at her and Allyssa calmly chipped the ball over the keeper's head. GOALLLLLLLLLL! I do believe that is Allyssa's first career college goal and it couldn't have come at a better time.

Our celebration and good feeling took a hit 5 minutes later when KWU equalized when we failed to keep track of their center mid and she hit a loose ball at the top of the box that Jackie Swanger was unable to save.

By the way, Jackie had an awesome game in the net.

We finished the second half again playing a lot of defense. The first OT period found us raring to go. The team totally pumped themselves up in between periods and they went out like gangbusters. Again, pure hustle created a chance. The third minute of overtime, Ashley Turco was able to run through a loose ball and like Allyssa, found herself 1v1 with the keeper. Did she put it away? Heck ya! Sudden death for KWU and a sweet goal for us. Game over, CSM wins 2-1.

I told the team afterward that I thought they grew up right before my eyes. We struggled in the first half but weathered the storm and finished strong in the end.

I was so excited at the winning goal that I ran onto the field (and I hardly ever do that--I try to maintain a calm composure through both struggles and success--ya--that didn't happen today.) After everyone had dog piled Turco, I ran up and gave her a big hug. A classic, epic battle that ended very nicely for us.

Next game is Wednesday against Bellevue.
Posted by Coach Jim Homan at 6:08 PM No comments:

CSM vs Graceland: A Rocky-esque Effort

I told the team at halftime of the game today that they were kinda like Rocky. They took some hits but kept moving forward. I told them they just needed to do more of the same and do the simple things and they will have success.

We did take a "knock-down" and conceded a goal about halfway through the second period. But, we picked ourselves back up and kept on. The defense was a wall after that and held nationally ranked Graceland (#11) the rest of the way, falling just 0-1.

I was very proud of the effort. Graceland is an excellent attacking team and to hold them to one goal is a great result. We had a few good chances, especially on throw-ins, but were unable to poke it in the net.

The next game is at Tranquility next Saturday against Kansas Wesleyan. Hope to see you there.
Posted by Coach Jim Homan at 2:16 PM No comments:

My intention is to post something at least after every soccer game. Well, the intention did not get translated to action this past week. Quick recap, we are doing a number of things well, but not quite enough. Also, we have been coming in second instead of first lately.

Our first game in California was played in over 100 degree heat on a turf field (which always raises the temp even further.) We started slow and National Ranked The Master's College put in 5 on us. The next day against Hope International we fared better, giving up an early goal but coming back to tie with about 10 minutes to go. Unfortunately, the game didn't end there, we ran out of gas and effort and gave up 2 goals in the last minute to lose 1-3. We also lost Raeleigh Withey during the game to a nasty shin bruise that we thought was broken. It turns out Rae didn't break her shin, but she still will be out for a couple weeks.

The rest of the trip to Cali was nice, we were able to go to the beach (it was cloudy and 65 degrees) and we did go to Hollywood but were not "discovered" by any movie execs.

On Friday we traveled to Rockhurst, a DII team in Kansas City. We were holding our own pretty well, first half a scoreless tie. But then floodgates were opened and again, we gave up 5.

Sunday, we went up to Morningside where we played much better and I thought we should've won. Morningside scored against the run of play after we thought a girl was offside. The video was inconclusive.

Right now, we are focusing on getting tougher, both mentally and physically. Sunday we played an excellent 89 minutes, creating chances and keeping possession. A series of mistakes and mental breakdowns led to giving up a goal and we were unable to bounce back with a goal or two of our own. We definitely had chances, but could not get the darn ball in the net.

We have an extremely difficult schedule, playing 2 nationally ranked teams in the first 3 weeks of the season along with a DII team. We are being tested by fire (naturally) and we will come through this test better and faster. I asked the team after the Rockhurst game, "Are we dead?" The answer was, "No!" Then I said if this isn't killing us, then it is only making us stronger.

I told the players that we have had a lot of moments of brilliance (and we have.) We just need to shift the brilliance to the finishing department and clean up the few breakdowns that the opponents are taking advantage of. Even though it has been a slow start, I am confident that we will be right in the mix of things when the conference games begin.

Next game is against #7 in the nation, Graceland. A great opportunity to excel. See you there, Saturday, September 18, 1 pm, @CSM.
Posted by Coach Jim Homan at 1:42 PM No comments:

Everything is Kung Fu and Ketchup

We are now in sunny California. Got in last night without many problems at all (except I am traveling with a bunch of crazy, goofy soccer players.)

The flight was long but we did get a movie (The Karate Kid.) Jackie Chan (playing the "Mr. Miyagi" part) said, "Everything is Kung-FU" and I belive him. So, if that is true, soccer is Kung-Fu. Today we need to gather our Chi and fight our way through any adversity. Yep, everything is Kung-Fu.

On the flight if we wanted dinner we had to pay $8.00. Needless to say, no one got dinner. We did get free peanuts! Wo. I think there was a whole 12 peanuts in my package (Heaven.) For some strange reason, we were very hungry when we got in to LA. I asked the guy at the rental place for a good place to go to eat and he recommended In and Out Burger.

So--we went and it was good, but I don't eat fast food like that very often and my stomach let me know. I found out that Ramsey really likes ketchup, so I took a shot of Rambo's Lake O'Ketchup for all to see. That's a lot. 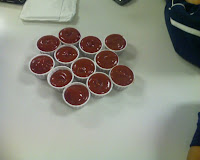 Today we go to Santa Clarita where it is over 105 degrees to play nationally ranked The Master's College. Wish us luck!
Posted by Coach Jim Homan at 8:36 AM No comments: