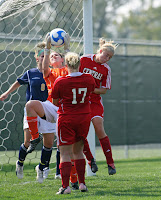 On Saturday, September 27, the Flames traveled to Pella, Iowa to take on the Dutch from Central College and came away victorius, beating the Dutch 7-1. Daniela Padilla opened the scoring in the first 5 minutes taking a pass from Kira Cross and dribbling deep in the box, beating the keeper with a rocket to the far post. Daniela added 2 more for a hattrick and Melissa King put in her 3 for another hattrick. The last 2 goals scored in the second half, one by Sara Schweiger and one by King were both from long distance and beat the keeper over her outstreched hand. It is good to see that we can score both from close range and from far away.

In the second half we worked on maintaining our discipline and after a slow first few minutes, we were able to impose our will, keep possession in the opponent's half and finish strong! 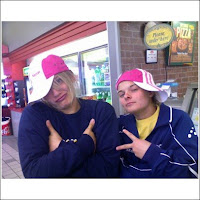 Before the game, some of our wacky players engaged in some shenanigans. On the way to the game, we stopped in Des Moines for an early lunch and a Subway/Kwik Stop. Kira Cross and Mollie Jones decided to try on some hats (see pic.) Also, Ashley Turco wondered if she could fit one of the lockers in the locker room at Central College. Well, the proof is right before your eyes...a perfect fit! 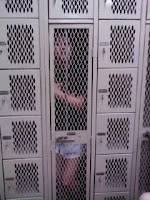 Our next game is on this Wednesday, October 1 at Midland Lutheran, 4 PM. Be sure to come out and root on the Flames!
Posted by Coach Jim Homan at 7:51 AM